Twenty-eight years ago, a Mennonite farmer from Leamington, Ont., named Abraham Harms fled to Cuauhtemoc, Mexico, as a fugitive after being charged by police for smuggling marijuana from Mexico into Canada.

Now, his son Enrique is indicted on charges of trafficking thousands of kilograms of drugs in the U.S. and is a fugitive himself — this time from American law.

More than two decades earlier, he had been jailed in Mexico for smuggling marijuana in his truck, claiming at the time he was set up by his father.

It’s suspected Enrique Harms operates under the protection of none other than Joaquin (El Chapo) Guzman’s Sinaloa cartel in Mexico because it took control of most of the drug trade along the U.S.-Mexico border around El Paso, Texas, after the death of the main leader of the Juarez Cartel in 1997.

“Those border points are gateways and cartels control the gateways,” says Ryan Cortez, an undercover drug agent in Oklahoma.

“And they’re very territorial. So did [Enrique Harms] have a connection to a cartel? With those amounts, he had to.”

American authorities have been concerned for several years about Mennonites bringing Mexican cartel drugs into Canada. The most recent court cases in Canada have been in Ontario.

Franz Klassen and his cousin Abraham Klassen were both sentenced in a Simcoe, Ont., courtroom in 2016 to six years in prison for smuggling cocaine into Canada.

Another pair of men, Jacob Dyck and Abram Klassen, are expected in court next month in Lethbridge, Alta., on charges of importing cocaine at the border crossing at Coutts, Atla.

Dyck and Klassen’s trial is expected to begin in Calgary on March 31.

The first Mennonite ever to be arrested, and subsequently convicted, for cross border drug trafficking, according to American authorities, was one of Harms’s mules — a Manitoba farmer named Cornelius Banman in 1989.

Harms had a nearly perfect front. He used farmhouses in southwestern Ontario to stash drugs and money and recruited Mennonites like Banman to move his drugs, according to Canadian and U.S. authorities. 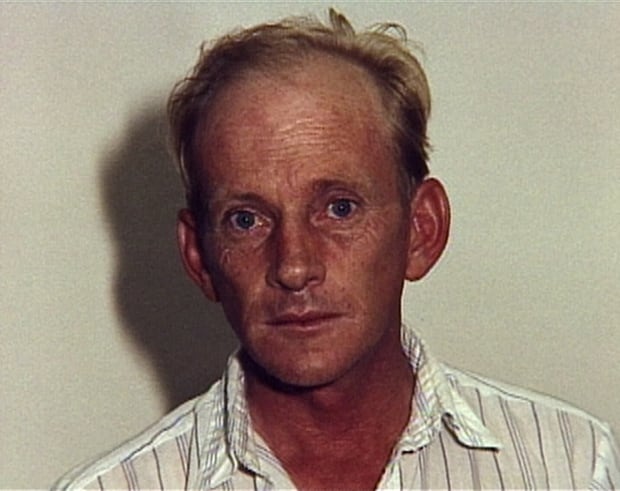 Abraham Harms, shown when he was arrested by Leamington Police Services in 1989, fled to Mexico after being released on bail. (the fifth estate)

In 1989, Harms was arrested in an undercover investigation in Ontario.

Once he was released on bail by the Leamington Police Services, he fled immediately to Cuauhtemoc, a town in the state of Chihuahua.

fifth estate co-host Hana Gartner tracked him down there in the 1992 documentary and that interview will be rebroadcast in tonight’s episode, “The Mennonite Connection.”

Two years later, while still a fugitive from the law in Canada, Harms died in a car crash in Mexico.

Some speculate that his son, Enrique, may have had a hand in that accident, although that has never been proven.

“One doesn’t know a family’s problems. But if money, drugs, that could play into it, it’s a possibility,” says Cortez.

After his death, Abraham Harms’s career as a suspected smuggler was immortalized in a ballad by a local Mexican band — Banda Joven.

I’m tired of being poor,
Abraham said to his sons.
I’m going to the U.S.
To sell a few kilos…
God took Abraham away
But his sons remained.

For more information about this story please go to the link below: